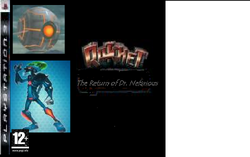 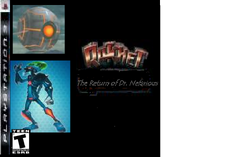 Ratchet was on his way to Breegus Nebula to free Clank from Dr. Nefarious and The Zoni, when Aphelion gets shot down over planet Marcadia.

Ratchet and Aphelion crashed in Capital City on planet Marcadia and witness a huge battle betwhen the Galactic Rangers and Dr. Nefarious' forces. Ratchet joined the battle and together with the Galactic Rangers, he managed to defeat Nefarious' forces. The galactic president told him that Nefarious has created many new Bio-Bliborators and is going to attack the Bogon and Solana galaxies with them. Ratchet says that he is going to destroy the Bio-Bliborators and then find Clank. Then Talwyn Apogee landed on Marcadia and said that she was willing to help Ratchet to destroy the Bio-Bliborators together. Ratchet and Talwyn downloaded the coordinates for planet Lyx.

Talwyn and Ratchet landed on Aracadia. It's an enormus moon. They had to fight Giant Klunk again and then take out Generator X9, who controlled the force-field who protects planet Lyx. When they tried to detroy it, it transfored into a giant robot. Klunk survived the fight against Ratchet and Talwyn, but is badly injuried.

The Suromnac Asteroid Belt was controlled by Dr. Nefarious and Ratchet had to fight his way through it.

Talwyn and Ratchet landed on planet Lyx. There they met the Smuggler who wanted to trade 3 Lyxian Leviathan Souls with a Gadgetron AntiDoorMissile. They used the AntiDoorMissile to get into Nefarious' base, and inside the base they had to destroy two Nefarious Meches. Then they downloaded the co-ordinates for Thyrranosis.

On planet Thyrranosis, Ratchet and Talwyn had to destroy the Robonoid Factory. They planted EM-76 High Explosives in the core of the factory and escapes it. Before the factory blew up, Ratchet downloaded the co-ordinates for Dr. Nefarious' Ice HQ at planet Koros.

It's the same base as Nefarious used in Up Your Arsenal, but with a lot of security upgrades. Tawyn and Ratchet gets into the base. When Ratchet has explored the whole base, he finds out that Ice Nefarious is not there. He gets the co-ordinates for The Icecruiser

Se own article: Ratchet: The Return of Dr. Nefarious Multiplayer

Ratchet: The Return of Dr. Nefarious includes a multiplayer mode with 10 locations, 10 skins and 8 weapons.

This installement includes a challenge mode, but no mega versions of the weapons. It does, however, includes better armor like the Snaggleskin.

Retrieved from "https://ratchetfanfiction.fandom.com/wiki/Ratchet:_The_Return_of_Dr._Nefarious?oldid=5917"
Community content is available under CC-BY-SA unless otherwise noted.